Behind the Rise of Unfiltered Wine, Sherry and Saké

With the rise of natural and low-intervention wines, producers are saying more by doing less. Many bypass a controversial stepâfiltrationâas a way to create more expressive wines. But itâs not just winemakers who are turning away from squeaky-clean cuvées. Sherry and saké producers are also rethinking filtering. By doing so, some feel theyâre not censoring the stories they want to tell.

Filtration can occur at different points during the winemaking process. It may be employed to further clarify wine after racking, the post-fermentation process where wine is separated from solids that have settled at the bottom of a tank.

Another process, sterile filtration, may be used right before bottling to ensure the wine is free of bacteria or harmful yeast. Proponents say it ensures that the wine will be shelf-stable, but detractors say careful winemaking eliminates its need and that the process strips wine of its character, especially when performed after racking.

Unfiltered Chardonnays have gained popularity with drinkers. But in general, they would like wines to be pristine. Patrons have taken issue with sediment and tartrates, two naturally occurring components that can appear in any wine. However, the same way that cloudy beer or cider can taste more interesting with some sediment still in, the same can be said for wine.

Filtration can occur at different points during the winemaking process. It may be employed to further clarify wine after racking, the post-fermentation process where wine is separated from solids that have settled at the bottom of a tank. 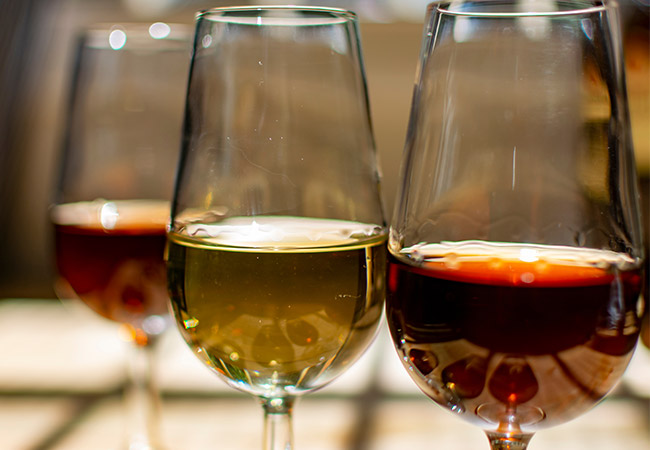 Producers in the Sherry Triangle in southern Spain create bottlings of en rama (raw) Sherries to give more context to the region.

With Sherry, the concept of terroir takes a backseat to the solera system, where wine moves through barrels incrementally as it ages. New wines are blended with older wines until a consistent, desired style is achieved. Aging under a blanket of yeast called flor is another defining characteristic of some Sherries. But several years ago, winemakers sought to tell a terroir story in their own way.

The fears of pure style Sherry spoilage are unfounded. Rather, the unfiltered wines evolved differently over time. Today, the En Rama Sherry is a means of emphasizing the uniqueness of these wines bred under flor.

Probably the most misunderstood unfiltered beverage is saké. Contrary to popular belief, cloudy nigori saké is filtered, as it can go through a coarse filter and retain some of the rice particles. But often, brewers press the liquid to separate it from the saké lees, and then reintroduce the solids. However, thereâs a style of unfiltered saké called muroka thatâs gained traction with brewers.

One of the best things about saké is that itâs not going to interfere with food. It is meant to be light, clean and water-white in color. Sakéâs crystalline tone can be achieved with charcoal filtration, a process known as roka, but some brewers consider it cheating. When making sake with precision, it should come out of the tank looking good before having to add charcoal to take out the color. When it comes to saké that is muroka, it often has a touch of color, generally lemon-to-gold toned and the rusticity is richer when charcoal is added.Â

Although not a legally defined term, muroka is often listed on labels alongside words that denote more powerful and intense styles of saké, like yamahai or genshu. Muroka is more like unfiltered wine with less intervention and steps involved. If customers are looking for something with less intervention, or more ânaturalâ, muroka is a great recommendation.