Everything You Need to Know About Calvados, Franceâs Historic Apple BrandyÂ  Â

While Normandy, France, may invoke visuals of D-Day or the island abbey of Mont Saint-Michel, it should also conjure a few delicious images: creamy cheeses, dry cider and most prominently, Calvados. An apple brandy produced exclusively in the region, the spirit keeps showing up on todayâs drink menus. Hereâs what you need to know.

A Taste of History

Calvados is an apple brandy with Appellation dâOrigine Contrôlée (AOC) status. It can only be produced in Normandy, much like Cognac is a specific brandy that can only be distilled from white wine made within a particular region from certain grapes. Calvados isnât distilled from wine grapes, however. It begins as cider.

While a small percentage of perry pears is permitted, the base cider is made primarily from apples. These must be grown in Normandy, where more than 200 varieties are cultivated. Producers can use four types of apples: sweet, bittersweet, bitter and bittersharp. The fruit is pressed and fermented, then distilled into an eau de vie and aged at least two years in oak.

The first written records of apple eau-de-vie and apple brandy date to the 1500s, but it wasnât until the 19th century, when phylloxera destroyed countless European vineyards and decimated Franceâs Cognac supply, that Calvados enjoyed much popularity beyond its birthplace. 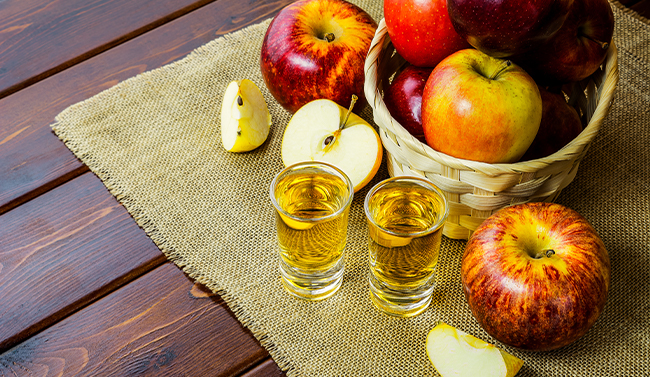 Generally, mature Calvados is most coveted, but some people, like Wine Director Victoria OâBryan of San Diegoâs Addison, suggest younger bottlings for a purer apple flavor.

âItâs a nice way to complete an evening because itâs not overly complex,â she says.

Calvados is great in cocktails, too, says Ravy Tray, head bartender at The Library Bar at The Rittenhouse in Philadelphia, where heâs been known to muddle it with lemon juice, apples and rosemary.

And though its prominent apple flavor makes Calvados easy to liken to autumn, it should be embraced year-round, says Matt Corbin,â¯beverage director of Coloradoâs 7908 Aspen.

âIf you have a great cocktail, you donât have to stick to a certain time,â he says.