A Guide to Understanding and Enjoying BrandyÂ

Brandy represents one of the biggest, broadest, and most beautiful spirits categories. Itâs also one of the most confusing because itâs made all over the world from a wide range of raw materials (primarily, fermented fruit juice). Here are a few guidelines designed to help you find a brandy youâll love, and how to best enjoy it.Â

What is brandy made from?

The vast majority of brandies are distilled either from grapes (Cognac, Armagnac, grappa, pisco) or apples (Calvados, applejack, apple brandy).

There is a smaller category of brandies (some aged, some unaged, the latter called eau de vie) made from pretty much any kind of fruit: peaches, cherries, plums, you name it. A number of countries, particularly in Europe, have distilled their local fruits for generations. Often, those varieties are marketed under the name used in their home countries, like Slivovitz (plum brandy, Eastern Europe); Kirschwasser (cherry brandy, Germany or Austria); or Rakia (apricot brandy, Central Europe).

The most famous ones are French.

Here are key French brandies to know, based on where they are made and how they are produced.

Cognac is the classic grape brandy, made in Franceâs Cognac region. The French government is very strict about the designation. Not all brandy is Cognac, though itâs certainly the best-known brandy in the U.S. Itâs aged in French oak, which yields a subtle, sometimes spicy flavor.

Armagnac is also a grape brandy, made in Franceâs Armagnac region. Itâs produced with some of the same grapes as Cognac, so the flavor profile is similar. However, itâs often bolder and spicier than many Cognacs, often with dried-fruit notes.

Calvados is an apple brandy, made in Franceâs Normandy region. Sometimes, itâs also made with pear. It tends to have a rich, baked-apple flavor.

America makes plenty, and from all kinds of fruit. There are plenty of grape brandies, as well as ones made from peaches and other fruits. There are also apple brandies that are notable.

Two subcategories are worth singling out. Straight apple brandy refers to American apple brandy. Applejack, produced historically by freeze distillation, or âjacking,â is typically a combination of apple brandy and neutral grain spirit. Often aged in American oak like Bourbon, applejack often tastes like a cross between apple brandy and whiskey.

The vast majority of brandies are distilled either from grapes (Cognac, Armagnac, grappa, pisco) or apples (Calvados, applejack, apple brandy).Â 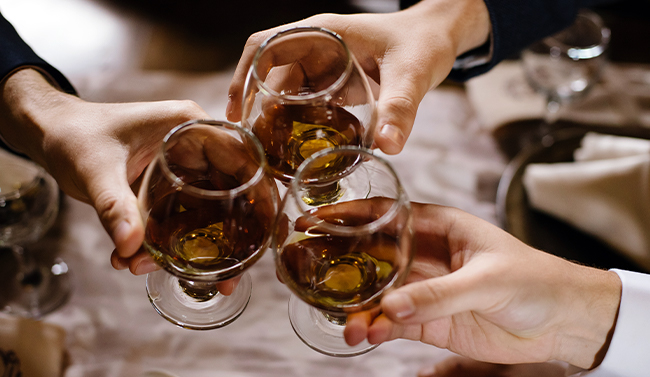 How about brandy made in other countries?

The process of making brandy can vary by country. Hereâs a breakdown of international brandies and the primary raw material.

Grappa (Italy): This is a âpomace brandy,â which means itâs distilled from skins, seeds, and stems of grapes, usually those leftover from the winemaking process.

Pisco (Peru or Chile): A particularly aromatic grape-based brandy. Usually, itâs from Peru, unaged, and rested in neutral vessels for a minimum of three months. However, a handful of piscos specifically from Chile are barrel-aged.

Brandy de Jerez/Spanish Brandy: Also seen in limited quantities in the U.S. It can only be produced in Jerez, the same part of Spain where Sherry is made, and theyâre usually aged in Sherry casks.

What do those letters mean on the label?

The alphabet soup of classificationsâVS, VSOP, XOâcan be confusing. Most Cognacs are a blend of brandies of various ages, and theyâre given these designations instead of a single age or vintage.

These designations usually are applied to Cognac, although sometimes, theyâre seen on other French brandies and the occasional American brandy label.

In addition to these designations, which often blend a range of ages, a number of Armagnac producers also release brandies with specific vintage designations.

How do you mix brandy? Or should it only drink neat?

The short answer: yes, you can mix brandy into cocktails. However, you might want to save more expensive or rare Cognacs for sipping neat. Consider trying a rocks glass instead of a snifter. I find that the narrowing of the glass concentrates alcohol in an unpleasant way, and prefer an open glass for enjoying aromas while the alcohol can dissipate.

But in general, donât be afraid to mix away.