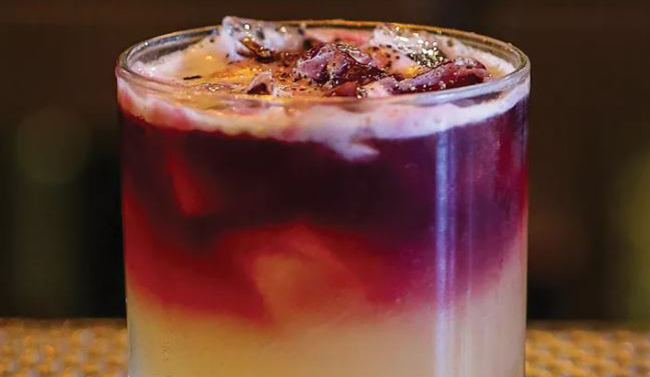 This particular twist the Pine Pepper Crush veers quite a bit away from the classic version and into the territory of the Tommyâs Margarita (a Margarita that has agave syrup rather than orange liqueur). In it, Blanco tequila takes the place of the usual bourbon, lime juice replaces the lemon juice and agave syrup replaces simple syrup. It also gets sweetness and acidity from muddled pineapple and spice from cracked black pepper, both of which pair well with the tequila.

Rather than the familiar red wine float used in the New York Sour, the Pine Pepper Crush gets a float of tawny Port. That gives it a similar striking visual but mutes the tartness of the pineapple rather than enhancing it like a traditional, more acidic red wine float would. The end result is bright and juicier than your average New York Sour but with additional complexity thanks to the pineapple, Port, and pepper.

In a shaker, muddle the pineapple and add two small grinds of black pepper. Add the tequila, lime and agave nectar syrup with ice and shake until well-chilled. Double-strain into a rocks glass over fresh ice. Float the port on top. Garnish with a twist of black pepper.