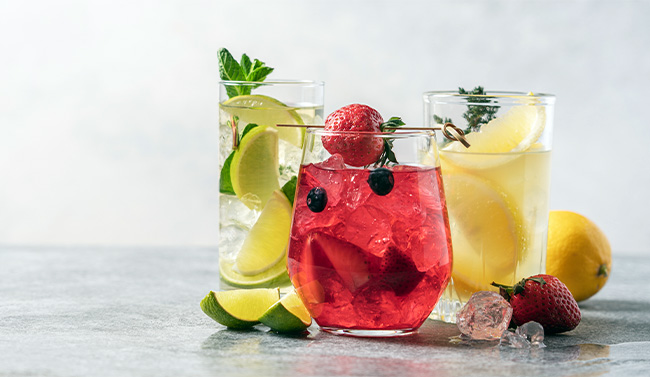 Drink Trends That Will Reign Supreme in 2023Â Â

Can anyone ever know the future? Nope. That wonât keep us from trying to predict it, thoughâespecially when it comes to drinks. Since 2022 has come to a close, we asked a few forward-thinking experts to make educated guesses as to what the year ahead might hold for the spirits, cocktail, and bar industries. Some of the responses surprised us.

For instance, are you ready to start thinking about French 75s in space? What about ever-more-expensive cocktails? Or the rise of shochu, the Japanese distilled beverage thatâs long been poised for bar cart stardom?

Hereâs what the pros see on the horizon for 2023.Â

Bartenders will double down on combining escapism and nostalgia into whimsical drinks, whether based on rediscovered classics from the â90s or comforting dessert-style cocktails. Social media-worthy visuals will also be part of the package.Â

âWith all the Dirty Shirleys and espresso martinis in the world making a comeback, a simple Harvey Wallbanger seems ripe for a resurgence on the horizon,â muses Nicholas Bennett, beverage director at Â Porchlight in New York City. Â âIts recognition and simplicity are perfect tools for a bartender, plus the [oversized Galliano] bottle will make a great weapon in the inevitable zombie apocalypse.âÂ

Across the board, bartenders say they plan to serve drinks that will appeal to those who are limiting or omitting alcohol. Â

Lauren âLPâ Paylor OâBrien, proprietor of consultancy LPDrinks and season one winner of Netflixâs Drink Masters, foresees âa focus on understanding no- and low-alcohol-by-volume (ABV) products and the ways to incorporate them into drinks to make the best end product.â Â

Thatâs supported by the rise in non-alcoholic bottlings and premixed drinks, as well as retailers and e-commerce platforms selling those products. Â

3. The Ascent of Agave Spirits Will Continue

Itâs no secret that tequila and mezcal sales have been on a tear the last couple of years, driven by the luxury spirits sector, celebrity-backed bottles and the continued appeal of margaritas and other cocktails. But agave spirits have still tailed vodka in terms of sales. Â

That may be poised to change; data tracker Allied Market Research predicts that the global tequila market is poised to grow at a compound annual growth rate of 6.6% from 2022 to 2031, noting that North America continues to be the biggest market for tequila by region. Â

This also might be the year that tequila pulls ahead. Beau du Bois, vice president of Bar and Spirits at San Diego restaurants Marisi and Puesto, predicts that for the first time, tequila will outsell every spirit category in the U.S. Â

In part, he credits increased transparency in the processes of how tequila is made.Â

Bartenders will double down on combining escapism and nostalgia into whimsical drinks, whether based on rediscovered classics from the â90s or comforting dessert-style cocktails. Social media-worthy visuals will also be part of the package.Â

Ready-to-drink [RTD] cocktails have been a juggernaut that gained traction during the pandemic, when seemingly every brand rolled out cans to enjoy at home or in the great outdoors (and more recently, at stadiums, concerts and other recreational venues). Â

Following spirits trends, the vast majority of those featured a vodka base. But tequila-based RTDs are âpoised to take off,â says Dale Stratton, an analyst at SipSource, a company that reports on drink trends and data. Â Â

The analytical arm of Wine & Spirits Wholesalers of America (WSWA) cites the popularity of margaritas and can-friendly effervescent Ranch Waters and tequila seltzers as positioning the category for a â2023 explosion.â Â

However, donât count out the whiskey segment yet, counters IWSR: âAll spirits bases look set to contribute to the progress of the segment, but it will be whisky-based RTDs that are registering the fastest growth,â as high-profile whiskey brands roll out Highballs and other brand extensions.Â

The culprit isnât necessarily higher booze prices, though. SipSource analyzed alcohol beverage prices supplied by the Bureau of Labor Statistics from January through September 2020, and found that for alcohol sold by retailers to consume at home (âoff-premiseâ) has risen 2.9%, while alcohol sold at bars, restaurants, etc. (âon-premise) has risen 5.8%.Â

âIt looks to me like on-premise operators are raising prices faster than the supplier and distributor price increases have been taken,â says Danny Brager, an analyst at SipSource.Â

So, if the price of rum is holding steady, why does that Mai Tai cost moreâand why is that likely to continue? Labor shortages, higher prices for food and rent increases are among the factors boosting tabs at bars and restaurants. Until those pressures subside, expect to pay more for an evening out.Â

âThe martini is not going anywhere,â says Lynnette Marrero, bartender and Speed Rack co-founder. âWith rising cocktail costs, this is still the best bang for the buck,â and that fact that martinis include fewer ingredients versus more elaborate concoctions means that bars âcan typically keep the price moderate.â Â

Luckily, creativity continues to grow in the space, she notes, thanks to the popularity of dirty martinis, espresso martinis, and the like. Â

Facebookâs fading, Twitterâs on the rocks and even Instagram just doesnât seem the same since Reels took over the algorithm. Increasingly, #drinkfluencers are finding #drinkspo on #drinktok. Whatever the hashtag of the moment is (#toktails? #whiskeytok?), this is where the drink hacks, tutorials and trends are bubbling up first. Thatâs likely to accelerate in the year ahead.Â

TikTok has been the top app by worldwide downloads in every quarter since the start of 2021, according to a report by â¯Sensor Tower, which puts the most recent count at 3.5 billion all-time downloads. Weâve also already seen how TikTok is breaking down barriers for wine content producers, and we neednât tell you more about how the Negroni Sbagliato became TikTok famous.

However, TikTokâs strict policies against alcohol-related contentâintended to protect it's younger demographicâmay keep booze brands at bay. At least, for now.Â

8. It Could Be a Breakout Year for Shochu

This next year could be the one for Japanâs native spirit, Marrero reasons. On July 1, New York amended the Beverage Control Act to allow shochu (24% ABV or under) to be sold under a beer and wine license.Â

âThis has opened up the amount of venues serving and using this creative spirit distilled from grains and vegetables,â she explains. Furthermore, âJapan just opened for tourism and I think the liquid research will start before people are able to plan their trip abroad.âÂ

9. Bar Pros Will Find the Spotlight

âThe single thing I believe will be the biggest trend next year? The rise of bar professionals to the level of chefs in public opinion,â says Jackie Summers, founder of Sorel liqueur. âHospitality has always included food and beverage, yet wine and spirits have always taken secondary importance in media.â Â

He points to the Netflix series Drink Masters as a signal that star-makers and consumers are ready to embrace the cachet of bartenders alongside chefs, pastry chefs and restaurateurs. âAfter all, does any bartender deserve to be a household name more than Julie Reiner?âÂ

According to trend-watcher Mintel, chaos on Earth will spur innovators to set their sights on space exploration as a source of food and drink inspiration. Â

We have to admit, some of the signs already are there: In September 2022, Champagne house G.H. Mumm revealed the first Champagne designed for human spaceflight, with a foam that coats the mouth; Scotlandâs Ardbeg (see the newly-released Hypernova bottling) and Japanâs Suntory have already experimented with sending their whiskies to space; and Richard Bransonâs Virgin Galactic is already booking reservations for space tourism. Â Â

Space-inspired spirits (like Kuiper Belt) and science-fiction themed bars are looking a little closer to reality.Â

Think our 2023 predictions will come to fruition? Take a look at our 2022 crystal ball to see how our experts fared.Â