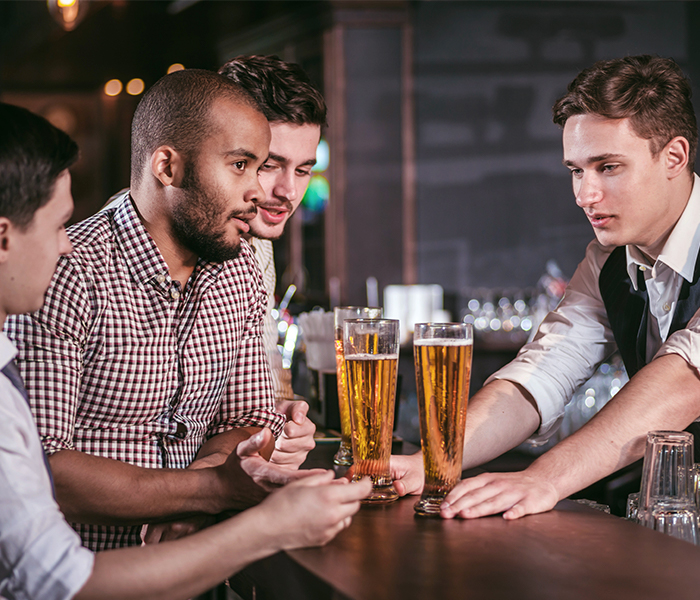 4 Signs Your Guest Has Had More than Enough to Drink

Indulgence is synonymous with vacations and holidays, but seasonal celebrations can often lead to excess. âAny time people donât have to worry about their day-to-day responsibilities, they tend to drink more,â says Frankie Jones, aÂ head bartender inÂ Washington, D.C.

Combine vacation days with shopping, travel and increased time with family and friends, and âpeople start drinking to ease stress, and itâs really easy for them to over-imbibe,â says Lindsey Scheer, the bar managerÂ in Richmond.

âââââââFor Mary Allison Wright, the owner of a yacht club in Denver, âthe volume of someoneâs voice and their body language are two dead giveaways someone has been overserved.â Scheer agrees, saying that volume and changed speaking patterns are the first thing she notices in drunk guests. âPeople tend to get really loud, and they often have slowed and slurred speech,â she says.
ââââââ

Lazy eyes, hiccups, accidentally bumping into others, customers repeating themselves and even falling asleep at the bar are additional cues someone needs to be cut off.

Jones often observes people divulging too much personal information when theyâve been drinking. âWhen peopleâs inhibitions are lower, they are more talkative and often tell you things you donât want to know. For example, if I know all about all the problems in your marriage, youâre probably intoxicated,â he says.

âAlso, Iâve noticed that for some reason when people get drunk, they play with their hair a lot, and they start to look really disheveled, â he says.

While many drunk people are loud, volume is not always a sign of intoxication. âSome people become really sluggish and quiet when they drink, and theyâre not really the same person as when they walked in the door,â says Jones.

He recommends observing guests over time for these types of personality changes. âIf the person was the quietest person in the room when they arrived and is now the loudest person in the bar or if they were loud when they came in and then get extremely quiet and subdued, you should be concerned,â says Jones.

Scheer also looks for abrupt changes in mood or âanyone being extremely emotional, whether thatâs getting angry or shouting or inexplicably crying,â she says.

Lazy eyes, hiccups, accidentally bumping into others, customers repeating themselves and even falling asleep at the bar are additional cues someone needs to be cut off. 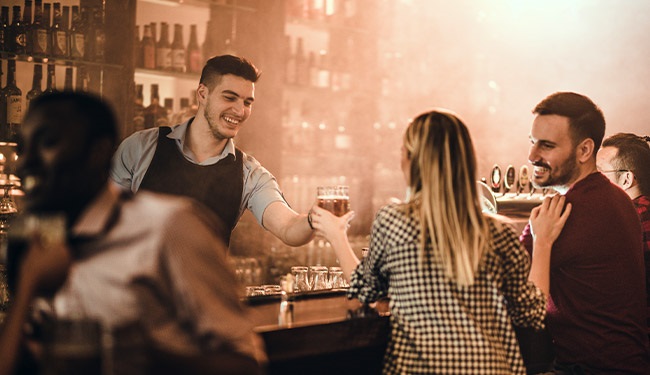 Interactions with Other Guests

According to Scheer, ânot respecting other peopleâs personal spaceâ is another sign guests may need to slow down. Jordan Moore, the beverage director in Atlanta, agrees, noting that âas people drink more alcohol, they tend to start chatting with other guests and intruding on parties that are not their own,â which can be a safety issue for all involved.

In Wrightâs experience, âwhen a guestâs inhibitions are lowered to the point of being drunk, they are much more likely to approach others to chat, make a move or start an argument,â he says. âThe burden then falls on us to either prevent, intercept or extricate the drunk guest from the safe space of others, as it only takes a second for the situation to go awry.â

The best way to prevent those uncomfortable situations? âModerate their drinking from the outset,â says Jones, who admits that while you canât control what a guest has consumed before they walk in your door, you can manage their drinking when theyâre in your bar.

âIf someone has three drinks in an hour, they havenât even processed the first drink yet,â says Jones, who sends guests a glass of water or simply ignores them if he feels someone needs to pace themselves. âDrunk people have no concept of time anyway and often forget if they ordered another drink or donât notice if they donât get one right away.â

For both Wright and Moore, low- and non-alcoholic drinks can help manage drunk guests and keep precarious situations from escalating. âWe try to be really aware when someoneâs been with us for a while of what theyâre being served and how often,â says Wright, who often recommends her menuâs low-ABV drinks to help slow down a guestâs consumption. âSurprisingly, a lot of guests end up thinking itâs the best drink theyâve ever had, and it allows them to hang out and drink with us a bit longer without getting out of control.â

Moore curated a list of zero-proof cocktails, which she often gifts to someone she sees getting too drunk. âIt buys me and them a bit of time, and they often like it and order another one, which resolves the problem and forces them to slow down.â

And when in doubt, a bit of trickery goes a long way. âIf someone is adamant about having another drink and they really shouldnât, Iâll just pretend to give them what they want, like a tonic when they ask for a Vodka Tonic or a red drink in a Martini glass if they ordered a Cosmopolitan,â says Jones. âThey donât even notice thereâs no alcohol, they think theyâre getting what they want, and itâs a really good way to avoid difficult conversations and keep everyone happy, which is what the holidays are all about.â